TJ is going to be at the German Comic Con in Frankfurt on April 22 and 23.

As promised in the welcome area, here´s a little summary about the Comic Con in Frankfurt. I have to say that I bought the Ticket just because of T. J. and I may should mention that it was my first Convention ever, so I didn´t know what to expect at all. However, any imagination got topped by him easily. In the Q&A Panel, which was completely filled he answered each and every question of Fans. Most questions where Bones related of course but he said that he would love to answer our questions the whole day instead of just 20 minutes. Also he mentioned that he´s currently working as independent write but tries to get a TV role again, to “come into our living rooms again”. (Yay!) One girl asked if she could come to stage and hug him. He answered that he will give “free hugs” to everyone at the autograph booth after the panel.

He really was the only! Star guest who stood outside the photograph booth the whole time to sign headshots, give free hugs and have a little chat with everyone who came up to him. I never had the opportunity to meet him before (and actually I never dared to hope so in the past 12 years) but what I saw and experienced was simply heartwarming. I´ve never seen someone being so open minded, funny, kind and open minded with mostly strangers to him, who got treated like friends nevertheless, so that you felt absolutely welcome and appreciated. It was absolutely clear to see that he really wanted the close contact with the Fans from his heart. I confess to have been nearly speechless for a moment or two (but rather messed up my English) by so much kindness. The free hugs definitely happened while greeting / saying good bye and I guess he was a bit surprised when mentioned that I came out just for him, when we chatted a bit about German towns actually. Like at the other Cons (of which I read here), we also got the gift bags with the bugs and a little photo inside. A really cute idea.

Even later at the photo shoot he greeted everyone (again), gave hugs and thanked for coming out another time - even though the order in the program was not to talk because of the schedule. As you can clearly see I am still amazed and truly grateful to have had this opportunity. I will treasure those moments in best memory forever.

Here´s our photo of the shoot: 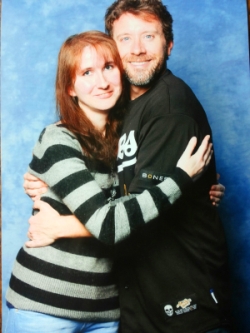 Thank you for posting about your con experience Daniela! I hope it will encourage a few more to do so! We love seeing the photos and hearing the stories about TJ!

Sharon
word count: 32
Blessed are they who see beautiful things in humble places where other people see nothing.-Camille Pissarro
Top

So, here is my report about my day on the Frankfurt Comic Con. I always wanted to go to a convention, and I actually was once: a one woman convention near Frankfurt many years ago with Amber Benson. But since then it was always like "too far, no money, no time..." But when I found out that TJ will come to Frankfurt I had to go. I bought the entrance tickets in advance about two weeks before the con took place.

Unfortunately I can't present you a photo with TJ and me, because I didn't took one

which I surely will regret one day, but for now I am still super happy to even have met and talked to him at the autograph table. Like Daniela I recognized that he was the only one who stood in front of the table instead of sitting behind it and meet you really face to face, eye to eye (depending on your height of course

) without this table in between.

Before I went to the con I had to decice if I want one of the photos signed that they provide or if I take something with me. A few years ago I asked for an autograph and I got such a nice one in a beautifully written envelope. After a bit of a thought I finally took this envelope with me. I think the man at the table who took the cash and wrote our names for TJ down might have found it a bit strange. TJ in contrast recognized it the moment he saw it. He sounded really pleased that I still have it and told me about his friend who wrote the adress on the envelope.

TJ is such a nice and warmhearted person, He really made you feel welcomed. He took his time with every fan,talked, hugged, gave presents (who else does this?) But I am sorry, because I think I totally „forgot“ to tell him anything nice. Of course I said „thank you“ probably more than once or twice and was busy answering his questions. But I think, I should have said something else too. But then, I also can't really remember everything I said....

I really love that he doesn't always write the same things on his autographs like many others (to... best wishes...) My autographs from him are really special to me, not only becaue of my name on it, but in both cases he refers to something I did or said – in one he refers to my note and in this one to the envelope.

Of course I've been to the Q&A Panel too. I sometimes had a hard time understanding the questions, so I had to try to figure it out by TJ's answers. One of the action areas got quite the attention on the panels. At least in the two I've been. I don't even know how I can call it in German. I think it's like a huge trampoline where the kids are secured, so that they can jump really high. Andrew Lee Potts said in the middle of the interview something like „Wow, that kid is jumping really high“ and TJ asked why they couldn't have done the interview over there „this would have been fun“.

Oh boy, I understand a lot of english, but writing and talking seems to get really hard for me. I think I should practice more often.

I knew that TJ would be a nice man, but he is so amazing and lovely. I didn't expect that and I am so glad that we went to the con. I won't forget that day!
word count: 621
Top

Thank you for sharing your story, Lonia! It´s nice to read another experience of the Con. It´s so cool that he really remembered the envelope! It makes me totally happy for you.

I know what you want to say. Also I told him thank you quiet a few times for his kindnes and generousity. Actually I wanted to say something nice as well but was way to surprised when he started to ask me several questions. Maybe it was more fun for him that way?
word count: 87
"My life turned around but I´m still living my dreams" - Anastacia
Top

Thank you Lonia for telling us about your con experience! I know how the envelope looked and who did it for him. They were really cool looking. It doesn't surprise me that he recognized it.

I'm betting TJ wanted to go jump on the trampoline thing too!

I'm really glad you were able to go, and of course, I love hearing how TJ stands in front of the table and hugs everyone. And yes, he is one to just start asking things, he likes to know about people so he asks things. After I talk to him I often think of things that I wanted to ask him, but I didn't get a chance because he says so much in such a short time, so I know how you feel about wanting to say something and not remembering. It is hard when he is RIGHT there. Looking at you. With those big blue eyes.

Sharon
word count: 214
Blessed are they who see beautiful things in humble places where other people see nothing.-Camille Pissarro
Top

That was fantastic to read, Lonia! Thank you so much!
I really felt I was there with you.


skftex wrote: Looking at you. With those big blue eyes.

Umm sorry Sharon, did you mean he doesn't have blue eyes when he talks to you?

word count: 60
"We make our lives out of chaos and hope. And love." - Angela Montenegro
Top

that even you, Sharon, have a hard time to tell TJ what you want to say, because he knows a lot that he wants to tell you

But I think his way to ask questions and tell things also makes you feel comfortable and easy to talk to him. At least I think that worked for me - you have no time to think " what did I want to say, how do I say that, I am a bit nervous"...

Thanks for saying that I did well in English. But really, it was much easier when I wrote more (in Forums or letters). During the last few years my nearly only experience in English is to listen - mostly when I watch films and series. I don't write much anymore and I only have to speak maybe once or twice a year when I am on holiday. But last year we were in Croatia and at the hotel and some other places as well, they all new German very well. So there was only limited need to speak. I really changed some sentences of my report quite often until I posted it - very time consuming

@ Daniela: I totally forgot to thank you for your report. It was great reading it! Lovely photo btw.

No worries, Lonia, your english is really good. I think most people struggle in other languages because there is often no need of daily use. It´s the same with me but as long as we all get each other, we can´t be that bad, hm?

Thanks for the compliment about the photo btw. It´s all about the guy beside me.

@Sharon Thanks for letting us know that TJ loves to ask people to learn about them. It´s calming when even you have trouble to remind what you originally wanted to say. We can definitely blame it on his big blue eyes. If that isn´t a good excuse than I dont know.

That was fantastic to read, Lonia! Thank you so much!
I really felt I was there with you.

Umm sorry Sharon, did you mean he doesn't have blue eyes when he talks to you?

Well he might take them out sometimes? LOL He isn't LOOKING at me when I talk to him though.

word count: 89
Blessed are they who see beautiful things in humble places where other people see nothing.-Camille Pissarro
Top

Great stories, ladies! Thank you so much for sharing them. It sounds like so much fun, to attend and get the chance to meet TJ.

word count: 25
I want to thank anyone who spends part of their day creating [& sharing their experience]. I don't care if it's a book, a film, a painting, a dance, a piece of theater, a piece of music… I think this world would be unlivable without art. ~ S. Soderbergh
Top
11 posts • Page 1 of 1